Posted on November 19, 2019 by brandnewheartnz

I have recently returned from an epic trip to Israel and the West Bank and I need to say a big thank you to my sponsors! I had a number of reasons to go. One was spiritual; to walk where Jesus walked. Another was historical; to see where so many significant moments of history have played out. Yet another was political; to see what’s going on now and experience the current reality in a turbulent land. Finally, there was an opportunity to catch up with Christians in the West Bank and to see life through their eyes. I am grateful to say that I experienced all of the above.

The land of Israel/Palestine has always served as a gateway to the world. People would travel up the Via Maris – the Way of the Sea, from Egypt, or travel the King’s Highway which put them near the Jordan River, and engage in commerce.  Thus, there are layers upon layers of history there. That history, inevitably, involves conflict; political, tribal, religious and economic. The empires of Assyria, Babylon, Greece and Rome have all vied for control of this little strip of land. Even in the last 200 years the Ottoman and British empires have fought over Israel/Palestine. And then there is today’s conflict.

Modern day Israel was born out of The Holocaust. The persecution and subsequent slaughter of 6.5 million Jews in Europe at the hands of Nazi Germany before and during World War Two created the conditions for the creation of a Jewish homeland in the land of Palestine. This was supported by the British who held the Mandate for the territory and the United Nations. This is a simplified version of course. There was the Balfour Declaration of 1917, the various Zionist movements, the shocking failure of Western Nations to accept Jewish refugees after WW2, Western guilt over the Holocaust and many other large and small events of history. So, the Jews were given a homeland, but there was the matter of the 700,000 or so Palestinian Arabs who already lived in the land. To them, it felt like an invasion. They didn’t want to share! This is understandable even without the ethic and religious tensions. Not many of us do want to share. We certainly don’t want to give up control or the majority position. Unfortunately that turned out to be the case and 70+ years of conflict began. It’s my opinion that the rest of the world, particularly the West, bears a lot of the responsibility for that.

Right now the challenge exists for both sides to see each other as part of the land, part of the story and fellow humans worthy of the right to exist and thrive. All of humanity finds this task exceptionally difficult. My own country has had to deal with a history of colonialists stealing land from Maori, of committing atrocities and perpetuating a system where Maori were set up to fail. The United States is the same. Look at almost any country and you see this pattern. This means that part of our fallen humanity is the loss of our ability to see the image of God, and therefore, intrinsic worth in people who are different to us. It’s a tragedy of global consequence.

The problem is huge and so we look to the powerful to fix it. Big mistake! The powerful are usually invested in maintaining division. Start with yourself and look for the mustard seeds of hope all around you. They exist in Israel and the West Bank. I saw it at the beach in Tel Aviv as everyone of all creeds and colours enjoyed the sunshine and a day off. I saw it in Bethlehem Bible College as they equip and empower young people to stay and be part of the solution. I saw it in my Bike Tour host who almost wept at the lost opportunity for peace when Prime Minister Rabin was assassinated in 1995.

We follow the Prince of Peace who is not afraid to expose our divisions and our prejudices. The death of our egos and our pride is the pathway to peace. This is a time of major exposure! Start by facing it in yourself. Ask the Spirit to examine your own heart. Where are you struggling to see God’s image in the other? What are your blind spots? I know you have them, because I do. Then bring them to the cross where all pride comes to die.

Our destiny is peace. Blessed are the peacemakers. 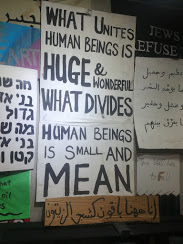 Brand New Heart Ministries is a ministry designed to honour, protect and nurture the new hearts given us in Christ and also, the eternity set in every person’s heart. God wants a heart to heart relationship with us!
View all posts by brandnewheartnz →
This entry was posted in Christianity, God, humanity, kingdom of God, peace, reconciliation, Spirituality, Uncategorized and tagged Conflict, history, hope, Israel, Mustard Seeds, Palestine, peace. Bookmark the permalink.