Last Tuesday I arrived back in New Zealand after two weeks in the United States. There I had the joy of attending a Wild at Heart Boot camp in Colorado – a retreat for the heart designed just for men – and then a week of travelling in California including a portion of the Pacific Coast Highway and Yosemite National Park. It was a time of deep reflection, of testing, of joyful surprises and of utter dependence on God’s goodness each day.

The biggest lessons came over two days near the end of the trip. I  was travelling from Monterey to Sacramento, but the day before had seen a big crack develop in my windscreen. Monterey Airport had no cars available so I needed to sort it out another way. As I prayed about it that morning I sensed that I should just go to San Jose Airport as had been suggested to me the day before. But I tried Monterey Airport again, and that signalled the beginning of a very long and very difficult day. Somehow I took a wrong turn and ended up very disoriented. I eventually got to the airport and, you guessed it, still no cars. I went to San Jose and missed the turn off. I had a lunch meeting with a Kiwi friend in San Francisco. I was late but I made it. Trying to get to the rental agency in town was a nightmare so I gave up and headed to the airport. Somehow I missed the airport and ended up going north where I was met with traffic jams. You get the picture. It was a day of wrong turns, missed turns and traffic jams. I had no GPS. I had Google but it was of limited use. I still had a big crack in my windscreen. The mishaps continued in Sacramento. I was exhausted, disoriented times twenty, BUT I was still praying, still trusting and still breathing. I somehow got to the motel with a new car and, with great thankfulness, fell into bed.

That day was an emotional, physical and spiritual battle. Up until that point the trip had been filled with joyful surprises. Seals at La Jolla, whales off the Santa Barbara Pier, elephant seals north of San Simeon, stunning views up the highway and the delight of Monterey. The temptation I had to fight was that I was on my own. God was no longer fathering me through the trip and I had to sort it out. The temptation was reinforced by the evidence. The day was clearly a disaster! Except it wasn’t. God was with me and I knew it. I had to own my choices and not blame anyone else but myself. I still got to see my friend. I still got to drive across the Golden Gate Bridge. The windscreen didn’t break. I didn’t fall asleep at the wheel. I may have felt a bit like Job but I also made Job’s choice. I stuck with it. 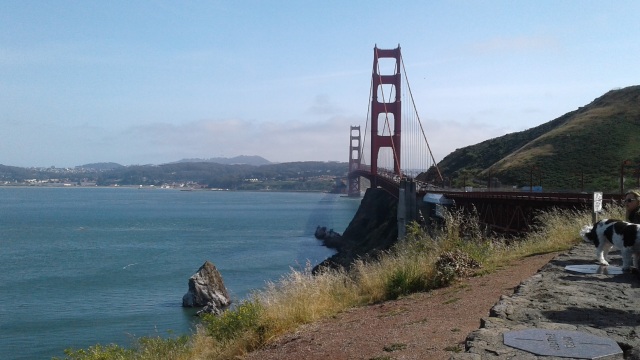 The next day was redemptive. Nice, easy driving in pleasant countryside was followed by the utterly disruptive beauty of Yosemite National Park. Not only that but Father used the vulnerability I was feeling to raise some issues and bring healing. It was a day of intimate companionship after a brutal day on the battlefield. There are rewards when you hang in there and don’t give up.

And we boast in the hope of the glory of God. Not only so, but we also glory in our sufferings, because we know that suffering produces perseverance; perseverance, character; and character, hope. And hope does not put us to shame, because God’s love has been poured out into our hearts through the Holy Spirit, who has been given to us (Romans 5:2-5).

It was one hard day in the midst of a glorious trip and obviously many of our brothers and sisters are going through tremendous hardship and suffering that doesn’t even compare to what I went through. The point is, though, that God is with us in the good and in the bad. The God who is clear in the sunsets and nature’s beauty is still present in the traffic jams and the confusing instructions. Jesus remains our King and Brother even as we struggle to draw close and revel in his love. The reality is that we are always his and He is always ours. I remained a son to the Father and an intimate ally of the King even as I felt the weight of oppression on me. By refusing to make an agreement with abandonment and despair I was able to maintain hope and receive a gift the following day. I was also able to know deep in my heart that I had intercessors praying for me in those moments. I was far from alone. I was loved intimately. I was Fathered and I was led. I grew a bit, matured a bit and the love of God settled in my heart a bit deeper. In the end, victory was mine.

Thank you for your love, support and prayers.

Brand New Heart Ministries is a ministry designed to honour, protect and nurture the new hearts given us in Christ and also, the eternity set in every person’s heart. God wants a heart to heart relationship with us!
View all posts by brandnewheartnz →
This entry was posted in beauty, Christ, Father God, prayer, restoration, spiritual warfare, trust and tagged battle, beauty, Heart, prayer, restoration, trust. Bookmark the permalink.