Posted on September 23, 2014 by brandnewheartnz

I was in Auckland yesterday meeting with my thesis supervisor at Laidlaw College. When I arrived the library was shut, and even more seriously, so was the café. A sign said that it 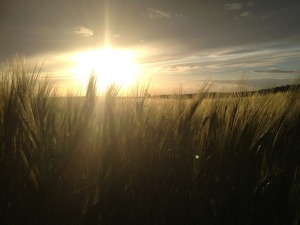 was the time for a community gathering so I made my way there. A speaker from Egypt was sharing. He said that many Muslims are coming to Christ in the very same areas where followers of Christ are being persecuted. In the very places where we read about the horrors of ISIS, Christ is appearing to people in dreams and visions. Tragedy and joy. Despair and hope. Death and life. These realities journey side by side in our lives to one degree or another and it reminds us that something much bigger than ourselves is going on. In Matthew 13 24-30 Jesus tells this parable:

The kingdom of heaven is like a man who sowed good seed in his field. But while everyone was sleeping, his enemy came and sowed weeds among the wheat, and went away. When the wheat sprouted and formed heads, then the weeds also appeared … The servants asked him, ‘Do you want us to go and pull them up?’

‘No,’ he answered, because while you are pulling the weeds, you may uproot the wheat with them. Let both grow together until the harvest. At that time I will tell the harvesters: First collect the weeds and tie them in bundles to be burned; then gather the wheat and bring it into my barn.’

Jesus goes on to explain that;

As the weed are pulled up and burned in the fire, so it will be at the end of the age. The Son of Man will send out his angels, and they will weed out of his kingdom everything that causes sin and all who do evil … Then the righteous will shine like the sun in the kingdom of their Father.

It’s a tough parable with a simple point. In this age good and evil are growing together. The kingdom of God is growing in numbers, in strength and in influence. The realm of evil is also growing but its attempts to choke the growth of the kingdom will ultimately fail. It’s an uncomfortable thought to think that evil is growing all around us, and yet the evidence is clear. We have a choice though. We can despair about the weeds or rejoice in the continued growth of the good seed. What Jesus has planted is still growing and will reap a harvest.

This parable does not give us permission to be passive about evil. We don’t simply shrug our shoulders and say ‘God will sort it all out in the end.’ If we do that evil will choke us. To keep the weeds in their place requires strength in the kingdom. It means seeking God with all our heart, loving him with all our heart and allowing that love to flow out of us to others. Jesus was a master at exposing evil through his radical goodness. His kindness to sinners exposed hardened hearts among the religious elite. The weeds need to be seen, exposed, named, isolated. The kingdom doesn’t hide evil; it reveals evil, even if it’s among us and needs to be dealt with.

All of this is to say, have hope. The kingdom is growing even as evil seems to flourish. As Jesus fills us with his life we learn to confront evil, watch the devil flee and yet, love our enemies with Christ-like love. God is at work in his world and in his people. Keep praying. Have faith. Guard your heart.

Brand New Heart Ministries is a ministry designed to honour, protect and nurture the new hearts given us in Christ and also, the eternity set in every person’s heart. God wants a heart to heart relationship with us!
View all posts by brandnewheartnz →
This entry was posted in Uncategorized and tagged evil, hope, kingdom of God, tares, weeds, Wheat. Bookmark the permalink.