The Hero with a Thousand Faces (first published in 1949) is a non-fiction book, and seminal work of comparative mythology by Joseph Campbell. In this publication, Campbell discusses his theory of the journey of the archetypal hero found in world mythologies and stories.

Since publication of The Hero with a Thousand Faces, Campbell’s theory has been consciously applied by a wide variety of modern writers and artists. The best known is perhaps George Lucas, who has acknowledged a debt to Campbell regarding the stories of the Star Wars films. 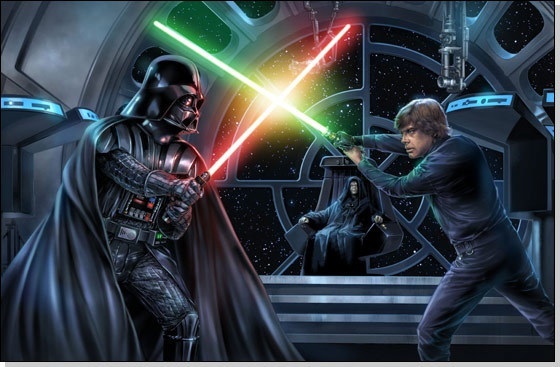 Campbell explores the theory that important stories from around the world which have survived for thousands of years all share a fundamental structure, which Campbell called the monomyth. In a well-known quote from the introduction to The Hero with a Thousand Faces, Campbell summarized the monomyth:

A hero ventures forth from the world of common day into a region of supernatural wonder: fabulous forces are there encountered and a decisive victory is won: the hero comes back from this mysterious adventure with the power to bestow boons on his fellow man.

It is challenging to write a story, a good story that holds together and speaks to the human heart in any deep way, unless you borrow from God’s story. The nature of humanity and the things that we long for such as love, heroism and sacrifice, were put on our heart by God (see Ecclesiastes 3:11). You really can’t write a good story without borrowing from God’s story.

So if you pay attention to any of the powerful, contemporary films such as Titanic, Braveheart, Gladiator, The Matrix, or The Lord of the Rings series, you realise that you can’t create a gripping story without, consciously or unconsciously, telling God’s story. I would imagine that a lot of these screenwriters are aware of what they’re doing, but I think the success of “Titanic” is based entirely on the fact that it parallels the gospel. The love story, the ship going down in tragedy, he dies so that she might live…we want to be loved like that, we want to be rescued like that and we want to live in a story like that. It resonates with us.

Why is it that we just love stories with a hero and the villain? Because these stories mirror our own story. We all either want to be a hero, or have a hero rescue us. The villain is the evil one and is always present. We feel both of these characters every day as we all live in a broken world.

The quest we face on this earth is all about the story. Will your story be great or small, will it impact or will be impacted, will it live or just exist.

May you this week rediscover that your story is part of a much bigger and greater story. May your realise that your role in the great story is unique and is so important and vital to telling the greater story. The greatest story ever told is your story. You are the vulnerable courageous hero. It is your time to get in the arena of life and dare greatly.

Finally, here is a video clip about your part in the greater story. Be inspired.

Brand New Heart Ministries is a ministry designed to honour, protect and nurture the new hearts given us in Christ and also, the eternity set in every person’s heart. God wants a heart to heart relationship with us!
View all posts by brandnewheartnz →
This entry was posted in Uncategorized and tagged darth vader, George Lucas, hero with a thousand faces, Joseph Campbell, Luke Skywalker, monomyth, obi wan kenobi, Star Wars. Bookmark the permalink.