Posted on January 14, 2012 by brandnewheartnz

Band of Brothers was a television World War II mini-series based on the book of the same name written by Stephen E. Ambrose.  The episodes first aired in 2001 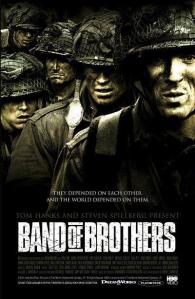 and are still run frequently on various TV channels today. It’s a story about the heart.

The story centers on the experiences of Easy Company of the 2nd Battalion, 506th Parachute Infantry Regiment assigned to the 101st Airborne Division of the United States Army. The series covers Easy’s basic training, the American airborne landings in Normandy, Operation Market Garden, the Battle of Bastogne and on to the end of the war, including the taking of the Kehlsteinhaus (Hitler’s Eagle’s Nest).

The title for the book and the series comes from a famous St. Crispin’s Day Speech delivered by the character of Henry V of England before the Battle of Agincourt in William Shakespeare’s Henry V. A passage from the speech is quoted on the first page of the book, and is also quoted by Carwood Lipton in the final episode.

We few, we happy few, we band of brothers
~William Shakespeare

Turn the clock back about 2000 years and there was another man, with a band of brothers.  Location: Garden of Gethsemane.

The garden at Gethsemane, is located on the Mount of Olives just across the Kidron Valley from Jerusalem. A garden of ancient olive trees stands there to this day. Jesus frequently went to Gethsemane with His disciples to pray (John 18:2). The most famous events at Gethsemane occurred on the night before His crucifixion when Jesus was betrayed.

As the evening began, after Jesus and His disciples had celebrated the Passover, they came to the Garden. At some point, Jesus took three of them—Peter, James and John— to a place separated from the rest. Here Jesus asked them to watch with Him and pray so they would not fall into temptation (Matthew 26:41), but they fell asleep. Twice Jesus had to wake them and remind them to pray so that they would not fall into temptation.  Jesus moved a little way from the three men to pray, and twice he asked His Father to remove the cup of wrath He was about to drink, but each time He submitted to the Father’s will. He was “exceedingly sorrowful unto death,” but God sent an angel from heaven to strengthen Him (Luke 22:43).

The events that occurred in the Garden of Gethsemane have reverberated down through the centuries. The passion Jesus displayed on that momentous night has been depicted in music, books, and films for centuries. From the 16th century, when Bach wrote two magnificent oratorios based on the gospel accounts of Matthew and John, to the present day with the film “The Passion of the Christ,” the story of this extraordinary night has been told again and again. Even our language has been affected by these events, giving us such phrases as “he who lives by the sword dies by the sword” (Matthew 26:52); “the spirit is willing, but the flesh is weak” (Mark 14:38); and “sweating drops of blood” (Luke 22:44). Of course, the most important impact of this night was the willingness Jesus to die on the cross in our place in order to pay the penalty for our sins.  This is the Gospel of Jesus Christ. This is the Good News.  This is all about the heart.

I’ve always wondered about the band of brothers though – Peter, James and John.  They fell asleep, just when Jesus needed them the most. Jesus must have despaired that his closest friends, his band of brothers were not there for him when he needed them.

No man or woman is an island. Do you have a band of brothers or sisters?  Are you accountable to them?  How can they help you in your hour of need?   Do you know someone who you need to check up on?  Today?

Where were you when I wept tears

Then he returned to his disciples and found them sleeping.  “Could you men not keep watch with me for one hour?” he asked Peter.  “Watch and pray so that you will not fall into temptation. The spirit is willing, but the body is weak.”
~ Jesus (Matthew 26:40-41)

Brand New Heart Ministries is a ministry designed to honour, protect and nurture the new hearts given us in Christ and also, the eternity set in every person’s heart. God wants a heart to heart relationship with us!
View all posts by brandnewheartnz →
This entry was posted in Uncategorized and tagged band of brothers, gethesemene, gethsemane, mount of olives. Bookmark the permalink.